Here’s a stumper for ol’ Pat Robertson, host of the uber-Christian talk show The 700 Club: Why did those Republican Supreme Court Justices who voted in favor of slaughtering all the unborn babies in Roe v. Wade not get smited (smote? smitten?) unto death and eternal damnation by a wrathful creator right there on the spot?

Viewer “Eugene” doesn’t understand why they got to live long and peaceful lives and weren’t struck down by God, as rabid Christians often promise will happen if people do ungodly things such as support same sex marriage, have premarital sex, or consume shellfish. It’s enough to make you question everything you’ve ever been taught about schmabortion.

Only God knows. Mysterious ways and all that. A favorite answer of fanatical Christians when faced with a world that completely fails to obey their bloodthirsty interpretation of scripture.

Robertson continued to non-answer the question, claiming that the Supreme Court was influenced to make a “bad decision” by liberal organizations like Planned Parenthood, which were “based on no science.” Wait, what? Planned Parenthood is the one with bad science? Not the pro-life organizations that continue to convince people that there is link between breast cancer and abortion, despite being repeatedly debunked by major medical organizations? 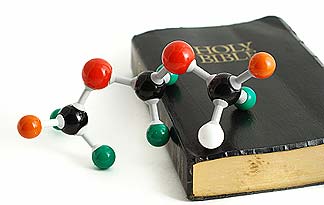 “Well, it OUGHT to cause cancer. That’s close enough.” – Moses

It is unknown if “Eugene” was satisfied with Pat Robertson’s response or if he thinks God should strike the teevee preacher with lightning, cancer, and vampire bats simultaneously for wearing a mix of fabrics.

One thing that’s clear: it never even occurred to Robertson to suggest God might be an understanding, forgiving type of deity… or that wishing death and vengeance on your enemies wasn’t a particular Christian way to live. If only there was something about that in the Bible.