Can We Dump Chicago’s Netflix Tax into the Harbor?

After the 4th of July, it’s safe to say that we’re all in a fairly patriotic mood. In honor of our forefathers, we get drunk, eat processed meat, and blow up stuff. But on July 3rd, our Chicago countrymen received distressing news that might incite them to pay even greater homage to the heroes of the Revolutionary War: the Windy City intends on taxing streaming services such as Netflix.

No taxation without season 4 of Orange Is the New Black!

You read that right: Chicago is extending its amusement tax to include a monthly “9% cloud tax” on digital entertainment streaming services,” which will apply to rentals and subscriptions ranging from “shows, movies, videos, music, and games to e-commerce transaction to online gambling,” which Netflix falls under. The city claims the tax has been passed to generate badly needed income and is no different than traditional sales/entertainment taxes. According to the Chicago Sun-Times, the tax is expected to generate almost $12 million dollars for the city. Phew, that’s an amount that would have made King George III very happy.

“I prefer the original British ‘House of Cards.'”

If any Chicago residents protest the tax, they will disappointed to know that Netflix has adopted a neutral stance on this issue. Netflix has only released a statement to media outlets, saying, “Jurisdictions around the world, including the U.S., are trying to figure out ways to tax online services. This is one approach.” 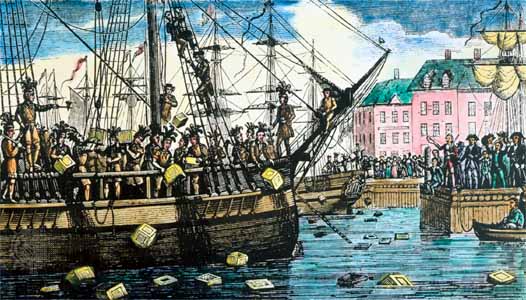 And this is one approach the people might take in response to this tax.

So far, there is no particularly outraged response from Chicago citizens. No dumping DVDs in Lake Michigan. No tarring and feathering tax collectors. No letter writing campaigns to the French asking for reinforcements. I guess they are too busy enjoying all the “fresh air” and “sunshine” of summer to truly understand the ramification of the cloud tax. But just wait until winter sets in! Those will be the times that try a man’s soul.

What do you think? Is the Chicago cloud tax worthy of revolt?