19 KIDS & COUNTING: Jessa Won't Be Wearing White to Her Wedding

You’d think a half-hour episode of 19 Kids & Counting would cause for celebration! But half-hour episodes come in pairs, so at best it’s just a shit sandwich cut in half, and not even diagonally with the crusts cut off, but down the middle with the same knife used to dice anchovies moments before. Let’s get started, shall we?

Five-year-old Josie finds out she gets to go wedding dress shopping with Jessa and her sisters, and SHE IS SO FUCKING EXCITED, YOU GUYS! This is easily the best moment of the entire night, and it’s over in the first minute. Sigh. If only they’d spent the next hour handing Josie stuffed animals and bowls of ice cream just so we could see the delight in her face, the show would’ve been a million times better.

And yet still unwatchable garbage, so let’s move on.

Fiancé Ben is all pouty that he doesn’t get to go dress shopping with the gals because co-dependence is indistinguishable from romance when you’re 19.

Ben’s mom and two sisters show up at the Duggar compound to be part of the shopping excursion. Jessa brags that Ben’s parents have the exact same personalities as her own, but Ma Duggar puts that theory to the test when—CRAZY EYES AT FULL—she eagerly assures Ma Seewald that “A year from now, you could be a grandma!!!” 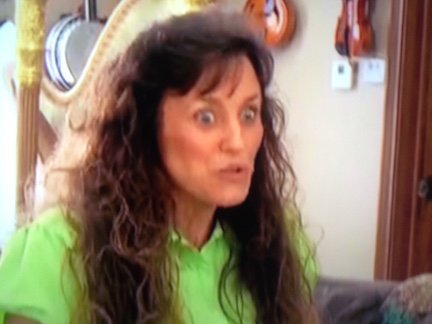 Thanks to @MrRichPeoples for the screen cap!

To her credit, Ma Seewald looks creeped the fuck out.

We immediately cut to the wedding dress shop, where the Duggars have RSVP’d for 12. The nice ladies at the front desk inform us that’s fucking ridiculous, although not in those words. Who’s in the gaggle today? We’ve got the bride, mom, mom-in-law, Ben’s two sisters, grandma Duggar, and six of the Duggar sisters. Looks like Jill’s too busy being subservient to her husband and, of course, Jessa didn’t Jana to get any spinster cooties on her pretty dress.

What is Jessa looking for? Sleeves and a high neckline, she says. That’s as much input as she can think of. Assertive is not her thing. Neither is personality. Because she’s cute and easy-going, she comes off at first glance as the most likeable Duggar, but wow, she’s just a non-entity.

We cut away to Ben in the interview room and/or the 1950s, saying the dress damn well better be modest “because I get jealous. This is my girl.”

Whiny, possessive boyfriends marrying personality-free virgins… Twilight fans must be delighted. No doubt Jim Bob is, too. He’s the captain of Team Control Issues when it comes to the women in his life.

What comes next could have been hysterical in the hands of a talented editor. It’s a rapid fire montage of everyone in the wedding dress party using the word “modest” in a sentence. Sadly, the show has no hint of self-awareness, so it’s just tedious.

Okay, time to liven things up with one of those cutesy Kids Say the Darnedest Things segments with Josie and six-year-old Jordyn. What should Jessa wear on her wedding day, the producers want to know. Gosh, what’ll these loveable li’l scamps say? A princess dress? A nightgown? Full bondage gear?

“She should wear a wedding dress,” says Josie.

“While walking down the aisle with my daddy,” adds Jordyn.

Um, okay. Yeah. That’s pretty much right on the nose. THAT’S NOT HOW THESE SEGMENTS ARE SUPPOSED TO WORK.

Ma Duggar reminds us “Jill got the full princess treatment” when she picked out her dress. Jill also got a full hour-long special devoted to the experience. Not Jessa. Jessa can go sit on a thumbtack for all anyone cares… including Jessa herself. “She just wants to get in, get the dress, and get it done,” says Ma.

Jessa comes out in dress #1, one hand covering up her exposed cleavage upper breast bone, lest she be damned to Hell for all eternity. There are polite ooo’s and ahh’s. Jinger claims she’s even more emotional today than when Jill picked out her dress because she’s closer to Jessa, so at least someone’s pretending to care.

“I’m just going to stand here and smile until everyone stops paying attention to me again.”

Jessa tries on dress #2, which is a harlot blush rather than pure white. The ooo’s seem sincere this time, and she spends a bit more time staring at herself silently in the mirror. Riveting television.

Meanwhile, back the Duggar Compound, Jill is doing arithmetic flashcards with 13-year-old James because that’s what counts as “school” for the Duggar brood. Jill recalls all the times James served as chaperone on dates with now-hubby Derick and how James was always more interested in the food than the date, and thank goodness, because how creepy would it be otherwise? We get a montage of James stuffing food in his face, although not on Jill’s dates, but at least they’re trying for humor this time.

It’s not clear why Jill is reminiscing about James as chaperone until she loads him up in the car to pick up Derick from work. Apparently Jill insists on driving Derick to and from work every day to maximize time with him. Aren’t newlyweds adorable? Why James is coming along is never explained. Maybe 13-year-old boys need to be chaperoned at all times lest they be left alone with their hand. James sits awkwardly in the backseat while Jill and Derick discuss morning sickness. She’s felt nauseas four times today, but we’re not going to show any of that unpleasantness because PREGNANCY IS AWESOME AND THE BEST AND ONLY WORTHWHILE THING THAT COULD EVER HAPPEN TO ANY WOMAN.

At Jill and Derick’s McMansion, they discover a present from eldest son Josh and his wife Anna waiting for them. Apparently Anna and the kids have assembled the world’s largest baby mobile with the Nepal flag and the Arkansas flag but not the American flag because the Duggars hate America. There are also letters hanging from the mobile, which Jill and Derick eventually realize spell “NEPAL,” and to be fair, it’s not the most obvious of word scrambles so I won’t knock their intelligence for that. (Nepal, for newcomers, is where Derick and Jill met while he was converting the heathen natives.)

There’s a conference call with Josh and Anna to say thank you, and three-year-old Michael briefly gets on the phone to say hi—but no sign of five-year-old Mackynzie, who is undoubtedly hiding from me, tiny whiny booger-face that she is.

Back at the dress shop, Jessa tries on a couple more dresses, and no one is even pretending to be interested now. Jessa says she’s going to try on her favorite one more time, and that perks up the crowd a little. She comes out in the harlot blush dress, which is genuinely lovely, and has a lot of sparkly, intricate bead work on the top. The family approves, and Jessa announces she’s found a winner. There’s not a wet eye on the house.

“All you unmarried chicks can kiss my blush ruffled ass.”

Joy Anna lets us know that Jessa isn’t terribly emotional, which is a polite way of saying detached non-entity, but Joy Anna thinks this is a good thing because Ben is a fucking puss. Just a whiny ass sissy.

And that’s the end of half-hour number one. Recap of number two right here!